⇒ Rotary Club video presentations you can use for your club meeting

You can see the current status of testing and infections on the FL DOH website: click here for Florida Department of Health-Covid-19 status

Announcements concerning the status of District 6970 events are found in the right side panel boxes.

Each club has to make its own decisions. Click here for updates by Rotary International.

Additional information can be found at the CDC: click here for up to date CDC information

Last week, our District lost two of its longest-serving members within 24 hours of each other. Both were veterans. Both were great examples of Service Above Self.

I got to know Past District Governor John Thompson the first time I walked into his club. You couldn’t avoid getting to know him—he greeted everyone entering the room with his infectious smile and a story. When I became District Governor, John called me and asked how he could help. I found out he had done that for every District Governor in the last 25 years. And when you needed him, he was there.

Another stalwart was Don Jones. I met him last Saturday, when I joined his club’s parade around his house to celebrate his 100th birthday. He was sitting out front waving as we drove past.  Don set a record for 65 years of perfect attendance.  But Don didn’t just sit around: he got Rotary to help set up Palatka’s first Blood Bank, as well as its low-cost blood screenings for those in need. He did a lot of other projects, too.

Every time I meet Rotarians like these, I set new goals for myself. As long as I keep my attendance up, I can match Don’s record by the time I’m 115. I just hope I do as much good as these two have.

Celebrate our heroes this Memorial Day. And be safe.

Mike Darragh
2019-20 District Governor
mikehdarragh@gmail.com
“Together, we see a world where people unite and take action to create lasting change – across the globe, in our communities, and in ourselves.”

WASH YOUR HANDS
Rotary Clubs in The Greater Jacksonville Area will provide a soap & water portable hand-washing station to an organization where it is most needed.
Free of charge.
Please complete the form. The hand-wash station will be delivered.
Thank you for your community leadership.
TOGETHER WE ARE SERVICE ABOVE SELF!

The electronic billboards are up! See them at:
I-95 south of Airport Rd.
Blanding Blvd. south of Constitution Dr.
Philips Hwy. south of Baymeadows Rd. 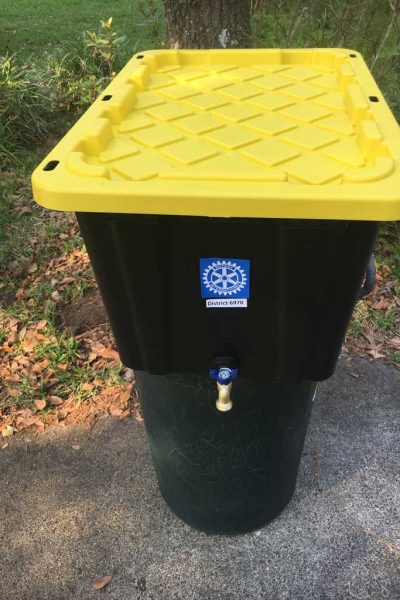 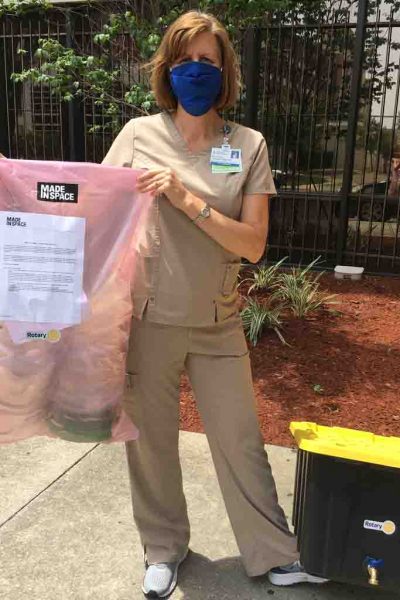 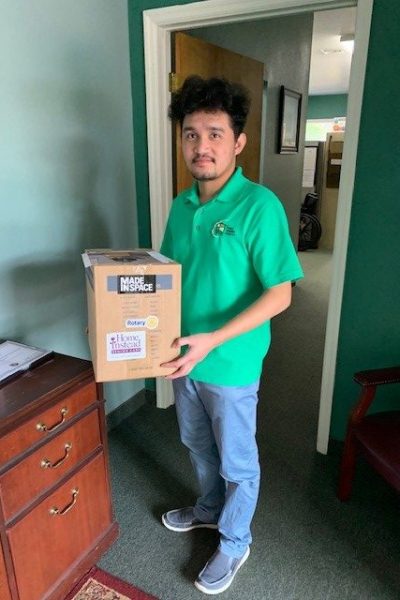 PLASTIC FACE SHIELDS DONATED BY MADE IN SPACE, INC, JAX DURING APRIL 2020 – ROTARIANS HELP STOP THE SPREAD of COVID-19
The Rotary District 6970 Disaster Relief Committee recently became aligned with a NE Florida-based aerospace company Made in Space, Inc. This private-sector organization utilized its engineering and innovative products’ design and manufacturing expertise, as a good corporate citizen, to provide during this National Emergency small quantities of plastic face shields as a contribution. This will be done, through Rotary, to healthcare and other front-line personnel. Our Committee is focused on supplying this equipment which is in high demand to those entities servicing the underserved members within our communities; primarily, for workers caring for infants and elders.
FOR CLUB PRESIDENTS  & COMMUNITY SERVICE CHAIRS / COVID-19 PROJECT: If your Club knows of an organization in its area of NE Florida which provides services for the underserved and has reached out for assistance in accessing a small quantity of PLASTIC FACE SHIELDS, please immediately contact with the details and quantity(ies) requested: Pat Mulvihill, Disaster Committee Co-Chair, at pem@axisp.com.

“THANK YOU, HEALTHCARE PROFESSIONALS”
April 11, 2020
SITUATION: VIRUS- April 2020, healthcare workers across the US are facing “war like” conditions with a pandemic as the enemy. Almost unheard of in recent history hospital systems in some areas, such as NYC, are near the breaking point.
RESPONSE: “Expression of Gratitude”- North JAX Rotarians are aligned with UF Health, Jacksonville. Pres. Dale Moe, the club’s board, and members Fred Allison, Terry Lee and Doug Register designed a Thank You Sign for UF North Campus.
More Info on the Rotary Sign-Project: Fred Allison, FAllison@DEXImaging.com
Padraic E. “Pat” Mulvihill, Co-Chair Emergency & Disaster Relief Committee, pem@axisp.com

Hurricane Dorian Rebuilding-How You Can Assist?

Picture and video from delivery of gasoline to residents of East Grand Bahama during the virus lock down.
Rotary got permission from the police to deliver gas. We are using the trailer you sent. Play the 0:20 video: https://youtu.be/visGGemeJVI
AG Lizbeth
How can you assist?
Read more…

The Five Avenues of Service

Rotarians volunteer to build in their communities

Vocational Service calls on every Rotarian to work
with integrity and contribute their expertise to the problems and needs of society.

Rotarians support BEAM and the community

Community Service encourages every Rotarian
to find ways to improve the quality of life for people in their communities and to serve the public interest.

International Service exemplifies our global reach in promoting peace and understanding. We support this service avenue by sponsoring or volunteering on international projects, seeking partners abroad, and more.

Youth Service recognizes the importance of empowering youth and young professionals through leadership development programs such as Rotaract, Interact, EarlyAct, Rotary Youth Leadership Awards, and Rotary Youth Exchange.
We use cookies to ensure that we give you the best experience on our website. If you continue to use this site we will assume that you are happy with it.OkNo